Salman Khan. Katrina Kaif. Ali Abbas Zafar. Bhushan Kumar. Vishal-Shekhar. Irshad Kamil – When the credentials are as huge as that, you expect the music to be of the next level. Moreover, considering the fact that the film transitions Salman Khan’s journey from being a youngster to an old man as he lives his life along with the rise of Bharat, the music needs to be big too. 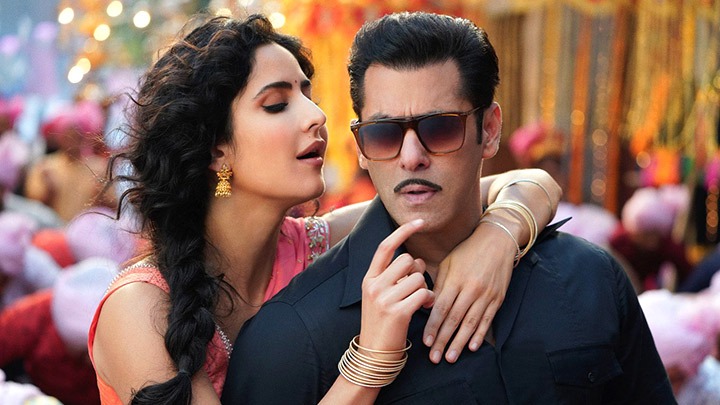 First to arrive is ‘Slow Motion’ and the song is anything but slow motion at play here. A fast paced number that is just the kind which goes with Salman Khan’s image, it reminds one of the kind of numbers that were heard in his earlier films like Ready and Bodyguard. Nakash Aziz gets the ‘sur’ right when it comes to singing for a Salman Khan number and Shreya Ghoshal is a surprise choice as a situation like this could well have been a ready stage for Neha Kakkar to step in. Nonetheless, a foot tapping number that takes time to grow but does eventually.

As is expected, a love song comes next in the form of ‘Chashni’. A couple of versions are heard here with newcomer Abhijeet Srivastava and Neha Bhasin getting a solo track each. While one has to give it to lyricist Irshad Kamil for coming up with a new word for a song, somehow ‘Chashni’ doesn’t manage to make an impact. It turns out to be way too full and though the singers do try their best, the final outcome is just not the kind that stays with you for the entire duration. An ordinary track.

A fun track comes next, what with newcomer Akasa Singh pairing up with Neeti Mohan and Kamaal Khan for ‘Aithey Aa’. A song with a North Indian setting to it, ‘Aithey Aa’ has Salman Khan and Katrina Kaif coming together and while their presence does elevate the proceedings to some degree, the overall outcome is not the kind that would make you jive along.

Later in the album there is a ‘dance version’ of the song that comes in as well with Nakash Aziz and Neeti Mohan pairing up. This eventually turns out to be one of those songs that make some sort of an impression after repeated hearing, but that’s about it.

Theme track of Bharat comes next and this time around director Ali Abbas Zafar steps in as a lyricist as well. In fact he also composes it along with Julius Packiam, and together they come up with ‘Zinda’ which can well be expected to play at number of important junctures of the film. Vishal Dadlani comes behind the mike for this inspirational number that is about confidence in one’s abilities and to fight for what’s right. This one is an out and out situational number and it would all boil down to the kind of visuals at display once it plays on.

The three songs that arrive next are all situational and the first that is heard is ‘Turpeya’. Sukhwinder Singh is the lead singer here for this number that has a Punjabi base to it and reminds one of many such songs like these that have been heard in the past with a folk feel to them. Expect this one to aid in the film’s storytelling. Jyoti Nooran renders ‘Aaya Na Tu’ and the manner in which she sings this one, you are reminded of Kailash Kher. A sad song, this one is quite ordinary and one hopes it doesn’t slow down the film’s pace.

Thankfully, ‘Thap Thap’ turns out to be a relatively better outing, though this too is again there to aid the film’s narrative instead of being the kind of number that would emerge as a chartbuster and bring audiences in theaters. Sukhwinder Singh, as always, gets the right energy in for ‘Thap Thap’ and one waits to see the kind of situation for which it has been composed.

One had terrific expectations from Bharat though the music here doesn’t turn out to be the kind that was heard in earlier Vishal-Shekhar-Salman Khan-Irshad Kamil-Ali Abbas Zafar collaboration like Tiger Zinda Hai. A couple of songs do make an impact though and for the rest one waits to see how they are integrated into the film.