Though Ayushmann Khurranna’s upcoming release is titled Dream Girl, one doesn’t expect a romantic soundtrack here. Reason being that even with Nushrath Bharucha as the leading lady, this Ekta Kapoor and Raaj Shandilyaa film isn’t really a love story and instead a comedy about a man who mimics the voice of a woman. Hence, one expects a situational fun score by composers Meet Bros who are joined by lyricist Kumaar. 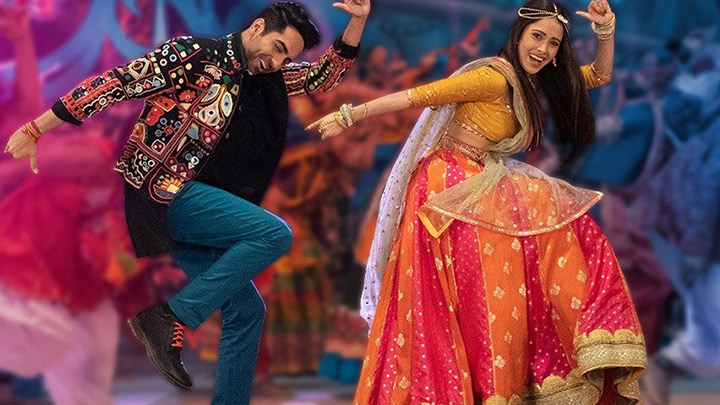 This is what one gets right at the onset too as Amit Gupta croons ‘Radhe Radhe’ which turns out be a fun song about Radha-Krishna love story. Ayushmann Khurranna gets into a full-on fun mood with this song which is also his biggest when it comes to the stage, setting and the canvas. In fact the manner in which this song is composed and orchestrated, it also reminds one of the kind of music that Sajid-Wajid created at the turn of the millennium. A good foot tapping number that also sees a good remix version, courtesy DJ Harshit Shah.

There is more fun in store with Jonita Gandhi and Nakash Aziz letting their hair down and coming together for ‘Dil Ka Telephone’. Yet again, there is ‘masti’ and ‘mazaa’ galore in this song that has a 50s style retro feel to it. A song where Ayushmann Khurrana gets into phone conversations with his various suitors, this one is a fun outing with a good hook to it that catches up with you instantly. In fact it would really add on to the film if portions of the song, which also has a remix version by DJ Himani Singh, appear at various junctures of the narrative.

is a hat-trick of fun songs with Mika Singh and Jyotica Tangri coming together for the legendary Marathi song ‘Dhagala Lagali’. A foot tapping song that has no dull moment whatsoever, this one is instantly catchy and would immediately find attention in the Maharashtra belt. A lively song with good music arrangements going for it, ‘Dhagala Lagali’ could well find itself on the list of DJ’s favourites also in quick time.

The mood changes though with a sufi outing ‘Ik Mulaqaat’. On the same lines as ‘Dekhte Dekhte’ [Phata Poster Nikhla Hero], this one has Altamash Faridi taking the lead and singing in a style similar to that of Nusrat Fateh Ali Khan. With guest lyricist Shabbir Ahmed pitching in, this romantic number has Palak Muchhal pairing up with Altamash. Meet Bros aim to give this one a contemporary touch by fusing it with rock elements as well. Though one doesn’t expect this one to be covering a very long distance, as a part of the film it should fit in well.

The soundtrack of Dream Girl concludes with a mandatory Punjabi ‘desi’ number ‘Gat Gat’ which has Jass Zaildar and Khushboo Grewal coming together. Yet again, there is good foot tapping appeal that the song carries, hence ensuring that the celebratory mood continues. In fact this is one of those songs that could well have been unveiled a little earlier as well since it has in it to become popular in time to come if promoted aggressively.

Dream Girl boasts of a good soundtrack with Meet Bros and Kumaar doing well to create songs that work for the narrative and also have it in them to enjoy a longer run as well beyond the release of the film. Hear it for some entertaining times.