When a biggie arrives from the house of Karan Johar with a massive starcast led by Akshay Kumar and Kareena Kapoor along with Diljit Dosanjh and Kiara Advani, you don’t quite settle for something ordinary. Moreover, with the film also being titled Good Newwz, you expect the same flavor in the soundtrack as well. 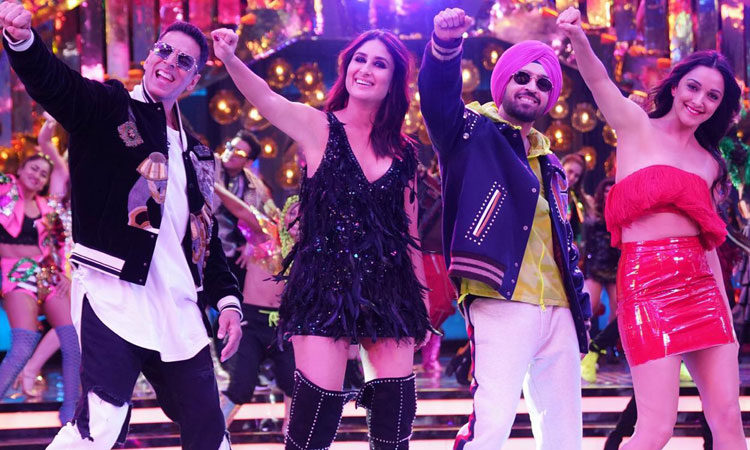 Tanishk Bagchi, who is known more for his recreated versions, hits it out of the park with an original track ‘Chandigarh Mein’. A Hindi-Punjabi number that has an eclectic mix of singers in the form of Badshah, Harrdy Sandhu, Lisa Mishra and Asees Kaur, this one has Tanishk and Badshah coming together for the lyrics department as well. A dance number with a mega celebratory feel to it, ‘Chandigarh Mein’ has a really catchy hook to it which doesn’t take time to get on you, so much so that you find yourself humming this one soon enough.

Next to arrive is ‘Sauda Khara Khara’ which has stayed on to be a major chartbuster for many years now. Originally rendered by Sukhbir, this one has Diljit Dosanjh taking over the center-stage this time around, and the actor-singer does a really good job all over again. With Kumaar stepping as the lyricist, this one has Lijo George-Dj Chetas as the composers while Dhvani Bhanushali is also the newest entrant behind the mike. A Punjabi dance number, it is now bound to have an even longer shelf life due to the presence of Diljit and Akshay in the video.

The manner in which ‘Maana Dil’ begins, it reminds one of ‘Fakira’. However, the similarity is just for a few seconds as soon enough B Praak makes a solid impression once again with his characteristic voice even as Tanishk Bagchi spins together a soulful tune for this beautifully written sad number by Rashmi Virag. While the ‘mukhda’ makes a good impression, it’s the manner in which the ‘antara’ portions are put together that take the song, which has Farhad Bhiwandiwala as the additional singer, take it to the next level. Hear this one for sure.

It is back to celebrations with RDB’s ‘Laal Ghaghra’ brought to fore once again by Tanishk Bagchi, Manj Musik and Herbie Sahara. A fast paced dance number that sets one feet tapping from the word go, this one is written by Tanishk Bagchi & Herbie Sahara and sung with aplomb by Manj Musik, Herbie Sahara & Neha Kakkar. The song’s placement in the film is also apt as it adds on to the fun feel that director Raj Mehta has adopted for the first half of the narrative. With each of the four songs making a really impression, it is indeed ‘good news’ so far.

A song with a core Western touch to it, ‘Dil Na Jaaneya’ arrives next. Composed by Rochak Kohli and Lauv who also sing this one with Akasa leading the show, this one is a kind of song that one associates with an urban romcom entertainer by Karan Johar. A soft number which is soothing to the ear, it has a mix of Hindi and English lyrics, courtesy Gurpreet Saini, Ari Leff and Michael Pollack. Though one waits to see if the song gains as much as popularity as rest of the massy soundtrack, this one would go down as a classy outing which is also heard in an unplugged version with Arijit Singh leading the show.

Dance and celebrations continue with ‘Zumba’ which is based on Punjabi folk music that is commonly heard in weddings up north. Tanishk Bagchi does well to bring on core Punjabi flavor in this dance number that has a mix of contemporary and traditional lyrics by Vayu with Romy taking center-stage as the singer. This is a song that keeps the narrative of the film exciting. Last to arrive is the peppy theme music of the film, ‘Good Newwz Theme’, which is just an apt finale for the soundtrack. KSHMR and Tanishk Bagchi are the creators for this fun track.

The music of Good Newwz is quite good and has already helped the film find ample attention coming its way. With the film doing quite well in theaters already and the music gaining further thumbs-up from the audiences, expect the songs to play on for many more months to come.