When Zoya Akhtar announced Gully Boy with Ranveer Singh, there wasn’t much known about what the film would bring on screen. Hence, it was surprise galore for the audiences when Ranveer Singh’s rap number introduced the film through a teaser. Now after catching hold of the soundtrack there is another big surprise in store as there are an astonishing 18 songs in there. 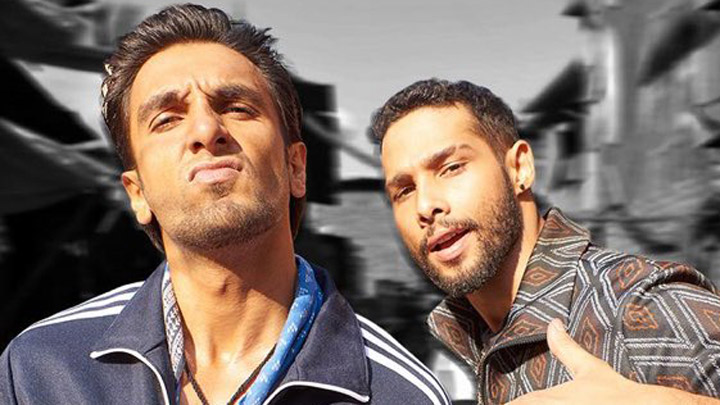 Ranveer Singh debuts as a rapper in real life as well, what with as many as five tracks against his name. Amkur Tiwari produced and Spitfire composed and written ‘Asli Hip Hop’ is already a riot for the manner in which Ranveer goes about rendering this one. A hit amongst those who love the underbelly of rap, this is followed by Divine, Naezy and Sez on the Beat’s ‘Mere Gully Mein’ which takes the whole excitement to the next level. It is riotous, ferocious and true to its genre, hence also ensuring very good recall value.

Things turn a bit soft though when Ranveer goes on to narrate Javed Akhtar written poem ‘Doori’. Though this one is a short piece, one feels something is missing as the heart-warming moments had just begun. This is soon followed by a musical piece by Rishi Rich that has added lyrics by Divine. Though one doesn’t see this one turning out to be a chartbuster like the first two songs, it should play on well in the film. The team also comes up with ‘Ek Hee Raasta’ and the song adds on to the soundtrack like a scene in a film does to the narrative.

Kaam Bhaari & Ankur Tewari write ‘Kab Se Kab Tak’ where latter pairs up with Karsh Kale to put together the composition. Voice of a female is heard in the soundtrack this time around with Vibha Saraf pairing up with Ranveer Singh. While the overall impact is there, the best is reserved for the flagship number ‘Apna Time Aayega’ which is put to tune by Divine & Ankur Tewari. Former’s lyrics along with Dub Sharma are truly acidic and one can clearly hear the cry of the underprivileged who wants to do something really good in life. A clear cut chartbuster here.

From this point on, Divine and Dub Sharma have a lot to offer in the soundtrack. Former writes lyrics for Chandrashekar Kunder aka Major C composed ‘Sher Aaya Sher’ which is decent but not exemplary. However the ones that indeed makes a mark is their ‘Azadi’. A cry of war for freedom from all the boundations, ‘Azadi’ has in it to find some good traction over the next few days. As for Dub Sharma’s solo effort ‘Jingostan’ (which plays in two versions), it seems like a bit of noise to begin with but soon you get a hang of it for the sheer spirit that it comes with.

When ‘Train Song’ comes, you realize that there is indeed a heavy duty team coming together, what with Raghu Dixit & Karsh Kale singing as well as composing the number along with Midival Punditz. In fact it is rather surprising to see as many as four lyricists collaborating for this one, what with Javed Akhtar, Karsh Kale, Gaurav Raina and Tapan Raj joining hands.

There is some ‘thehrav’ in the proceedings though with Jasleen Royal composing and singing ‘Jahaan Tu Chala’ in her characteristic style. The overall effort is easy on ears as Aditya Sharma’s lyrics are simple too and hence have a soothing effect.

It is back to business though with Kaam Bhaari composing and writing a namesake number ‘Kaam Bhaari’. Since this is a new world of rap and something that is far away from being Bollywood, one takes time to adjust to this tune that has Ankur Tiwari pairing up as well. Soon after, he comes along with Mikey McCleary to compose ‘Jeene Mein Aaye Maza’, a well-made number where he takes the centre-stage as a lyricist as well as singer.

There is also an all-around effort by singer and lyricist Ace who pairs up with ishQ Bector in the music department to bring on ‘Har Gham Mein Khushi Hai’. The song fits in truly well for the genre that Gully Boy is promoting and hence it turns out to be a rather seamless experience.

On the other hand there is Western-Punjabi collaboration next with Prem & Hardeep and putting together a really well composed ‘Goriye’. A fun number which actually has a Bollywood touch to it as well, it has Arjun, Blitz & Desi Ma coming together with Kaka Bhaniawala and Bhinder Khanpuri. This one is a potential success too and should be unveiled really quick.

The soundtrack concludes with Viveick Rajagopalan composed ‘tapori’ number ‘India 91’ which again belongs to the slum setting that Gully Boy belongs to. There is a huge team of MC Altaf, MC TodFod, 100 RBH, Maharya and Noxious D coming together for this song and one ends up wondering about the real name of any one of these members.

If one has to define the music of Gully Boy in one word, it would be ‘trippy’. There has been no precedence of such a soundtrack in Bollywood before and it could well turn out to be a trendsetter if expected by the audience. An experimental score, this one has a few songs in there which are potential chartbusters in the making.