Filmmaker Luv Ranjan has certain style when it comes to creating soundtrack for his films. His Pyaar Ka Punchnama series as well as Sonu Ke Titu Ki Sweety in particular have boasted of youthful peppy music. Now that his production Jai Mummy Di is releasing, one expects something similar from over half a dozen songs that appear in the soundtrack. 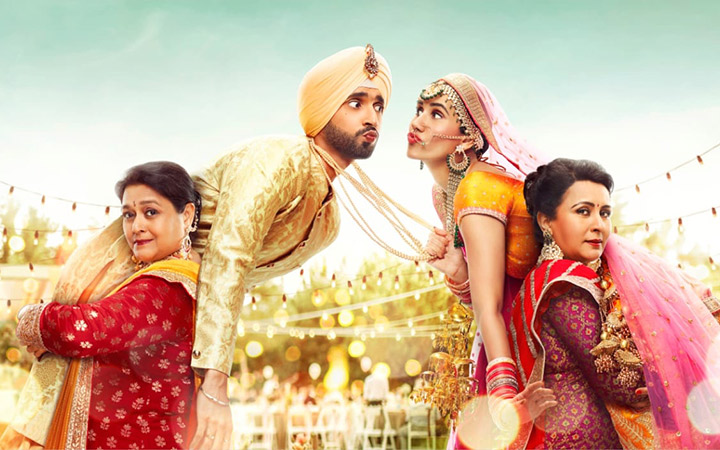 As is the trend, Jai Mummy Di too kick-starts with a couple of recreated songs. First to arrive is Sukh-E Muzical Doctorz composed and Jaani written ‘Mummy Nu Pasand’ which has been recreated by Tanishk Bagchi who is also the man behind additional lyrics. Sunanda Sharma is the singer here and boasts of a distinct voice which is strikingly different from many of her ilk and hence lends quite a solid impression. The song has a catchy hook to it and is a chartbuster all the way. Even if you haven’t heard this song before, you would like it this time around.

Next to arrive is the chartbuster track ‘Lamborghini’ which has a beautiful sound to it and has just the right mix of Punjabi mix and ‘desi’ feel with a slightly Western touch to it which gives it an edge. Written by Kumaar, this celebration track has a peppy presentation by Meet Bros who utilize the vocals of Neha Kakkar and Jassie Gill quite well to result in a number that would find a place amongst youth as well as elderly alike.

The surprise though is ‘Dariyaganj’ which is rendered by Arijit Singh. It is always so refreshing to hear a new team collaborate to create something melodious and this is where one would complement lyricist Siddhant Kaushal and composer Amartya Bobo Rahut. They put together an unconventional hook for the song’s title while ensuring that the melody element remains intact. Rest is taken care of by Arijit who along with Dhvani Bhanushali makes sure that this romantic number finds itself in your playlist. Later Dhvani goes solo to make further impact.

With a hat-trick of good songs, expectations soar further from Jai Mummy Di. Mika Singh is the man of the moment as his boisterous vocals kick-start the proceedings for ‘Ishq Da Band’. The manner in which the singing team (with Shilpa Surroch and Harjot K Dhillon as the other singers] comes together for this Gaurav Chatterji composed and Ginny Diwan written number, you get the feeling of one of those David Dhawan films from the 90s where ‘masti’ and ‘dhamaal’ ruled in many a Govinda or Salman Khan starrers. This one is fun while it lasts.

Yet another new team joins forces for the title track ‘Jai Mummy Di’. Composer Parag Chhabra and lyricist Shellee join hands for this situational number. Though there isn’t anything really memorable about this Nikhita Gandhi, Parag Chhabra, Vivek Hariharan and Devender Pal Singh sung track, expect this one to arrive at certain montage sequences in the film to lend entertainment to the narrative.

Though Amartya Bobo Rahut and Siddhant Kaushal had done quite well in ‘Dariyaganj’, same can’t be said about ‘Manney Ignore Kar Rahi’ which comes across as a jamming session at best. Agreed that this Amitabh Bhattacharya rendered number aims to be all funny and has a parody flavour to it, the end result is the kind which can possibly be enjoyed only if accompanied by some really entertaining visuals.

Last to arrive is ‘Ajaa Ajaa’ which has a 50s style rock-n-roll feel to it and is yet another situational track. One in fact wonders at what situation of the film will this Divya Kumar sung number appear eventually as it comes across like a force fitment. Composed by Rishi Singh & Siddharth Amit Bhavsar (who also lend additional lyrics), this one is written by Gautam G. Sharma and Gurpreet Saini who don’t quite manage to come up with anything memorable.

The music of Jai Mummy Di starts well with a couple of recreated songs and then a couple of original songs making a mark. However, the impact tapers a bit as it progresses further. Nonetheless, it still manages to almost deliver what it promised with at least 2-3 songs expected to play on for some more time to come at least.