For a film which is a quirky comedy, you expect a trippy soundtrack. Moreover, it has to be something different instead of being quintessentially Bollywood as the stage, mood and theme is altogether different. With these kind of expectations in mind, you play on the soundtrack of Judgementall Hai Kya which has a different composers, lyricists and singers coming together to create five distinct songs. 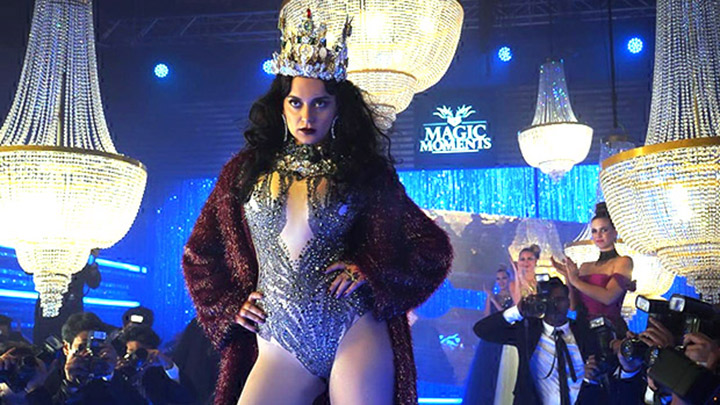 Well, first things first, despite the unique theme of the film, it is apparent that the makers wanted to bring on a quick-fire hit to kick-start the proceedings. That’s the reason why Badshah and Navi Kamboz’s non-film chartbuster ‘Wakhra’ is presented in a ‘filmy andaaz’ as ‘The Wakhra Song’. The song stays on its chartbuster route with the man for the job, Tanishk Bagchi, getting it right all over again. As a composer-lyricist, he brings in his own ‘tadka’ to this Navv Inder, Lisa Mishra and Raja Kumari number which gets your feet tapping all over again.

It’s time to bring on some 60s/70s retro back with ‘Para Para’ which has Rachita Arora and MuzikFactory (OmDixant) bring singer Arun Dev Yadav behind the mike. The entire team does an R.D. Burman piece here, reminding one of a similar experiment that Vishal-Shekhar had done for the title song of Jhankaar Beats many years back. A song which has Prakhar Varunendra pretty much introduce the character of Kangana Ranaut to the audiences, this one has a good situational appeal to it and may he aided by some quirky picturisation too.

Next to arrive is the title song ‘Judgementall Hai Kya’ which again has composer Rachita Arora pair up with lyricist Prakhar Varunendra, and together they carry forward the spirit of ‘Para Para’. This time around it is time to bring on a piece of the Hollywood musicals that step into this genre, and one has to admit that the core hook is quite intoxicating. Just an extended piece of this hook could well keep many a DJ happy, though for the Bollywood version it is the team of Jaspreet Jasz, Rachita Arora and Nivedita Padmanabhan who create a unique outing.

The manner in which Surabhi Dashputra sings Kumaar written ‘Kis Raste Hai Jana’, you are reminded of quite a few songs that Jasleen Royal has sung in Hindi movies. Nonetheless, this one is a different set up and it has composer and singer Arjuna Harjai doing well to come up with an outing that should make a good situational appeal in the film. As is the case with such songs though, one just hopes that the song is aided by good picturisation so that it doesn’t slow down the pace of the film’s narrative.

Last to arrive is ‘Kar Samna’ which lasts just 80 seconds and appears to be a piece that may appear towards the film’s pre-climax or climax. Daniel B. George comes up with a sound that briefly hints of Alfred Hitchcock’s Psycho, though overall the song is so short that it ends before you actually hear much for it. A chorus track by Amir Khan, Brijesh Shandilya, Protijyoti Ghosh and Daniel B. George that could well appear at a situation in the film when Kangana Ranaut is all fired up and is out for revenge, it is put to words by Prakhar Vihaan.

As expected, the music of Judgementall Hai Kya is largely situational and is in line with the trippy theme of the film. When seen in context of the film’s narrative, it could well hook your attention.