Considering that Khandaani Shafakhana is a Bollywood film, it has half a dozen songs in there. Otherwise a film with a subject revolving around ‘let’s talk about sex’ hardly has the kind of premise which would warrant a music album. Nonetheless, this is indeed the case with this Sonakshi Sinha, Badshah and Varun Sharma film and one waits to hear what is in the offering. 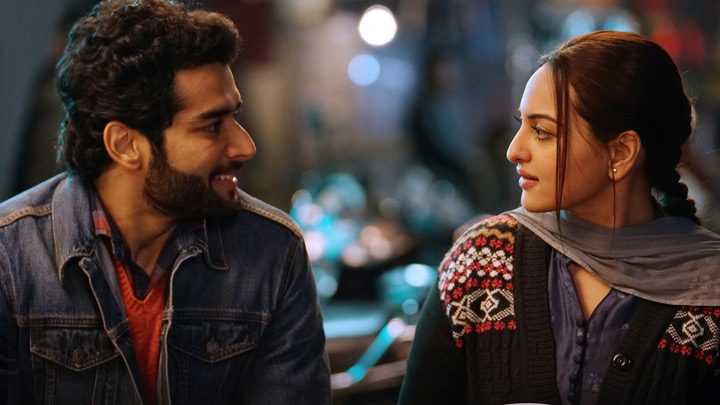 As is the trend, a couple of recreated numbers – both courtesy composer and lyricist Tanishk Bagchi – open the soundtrack. First to arrive is Jasbir Jassi’s ‘Koka’ which is a good party number that has an immense foot tapping appeal to it. With Badshah and Dhvani Bhanushali joining the fun and Mellow D chipping in with additional lyrics, ‘Koka’ has been a chartbuster over a period of time and would only consolidate its hit status in months to come as well.

Next to arrive is ‘Sheher Ki Ladki’ which was a rage back in time when seen in the film Rakshak. The song is recreated with Badshah and Tulsi Kumar, and the overall results are quite good all over again. The core hook of the song is what makes you revisit this one all over again, and there is someting intoxicating about ‘Sheher Ki Ladki’ that it sounds as fresh as ever.

After a couple of dance songs arrives a romantic track which is put to tune by Payal Dev and written by Shabbir Ahmed. Titled ‘Dil Jaaniye’, this one rendered by Jubin Nautiyal and Tulsi Kumar is a pleasant hear and stays well with you for its near five minute duration. With a bit of Punjabi in there, this one is fine while it lasts though, its heard-before feel means you don’t quite carry it with you after you are through listening to it.

It’s back to party time with Badshah playing a triple role of composer, lyricist and singer for ‘Saans To Le Le’. As is the case with Badshah tracks, there is an inherent hook sound here as well and that’s what sticks in your mind after you have heard it a couple of times. Though overall the song, which also has Rico chipping in as a singer, doesn’t really give the impression of a major chartbuster in the first go, one waits to see how it is picturised. That could well make a difference to the overall popularity that it ends up gaining eventually.

The song which arrives next actually turns out to be a soothing outing that makes one feel that it could well have appeared a bit earlier in the soundtrack. The manner in which Tochi Raina sings ‘Udd Jaa’ is indeed quite impressive and the overall effort by composer Rochak Kohli and lyricist Kumaar is also something that you do notice. Yet again, this one isn’t the kind that turns out to be an instant chartbuster. However, there is something soulful and serene about this situational number that you wouldn’t mind playing it in loop and listening to it for long.

Rochak Kohli concludes the album with Altamash Faridi sung ‘Bheege Mann’ and this time around the end result is just about ordinary. A slow moving situational track written by Gautam G Sharma and Gurpreet Saini, it actually brings down the pace of the soundtrack. Had there been one of the three party numbers placed as the last song in Khandaani Shafakhana, it may just have made for a better end result.

The music of Khandaani Shafakhana turns out to be better than expected. One expected that most of the songs in there would be situational but this one actually turns out to be a good collage of songs with dance numbers, situational songs and a romantic number thrown in as well.