Back in 2009 when Love Aaj Kal had released, its music had turned out to be a roaring success. Yet again, it’s the team of Pritam and Irshad Kamil coming together for Imtiaz Ali and one waits to see that after creating magic for Saif Ali Khan and Deepika Padukone a decade ago, whether they have repeated the same for Kartik Aaryan and Sara Ali Khan as well. 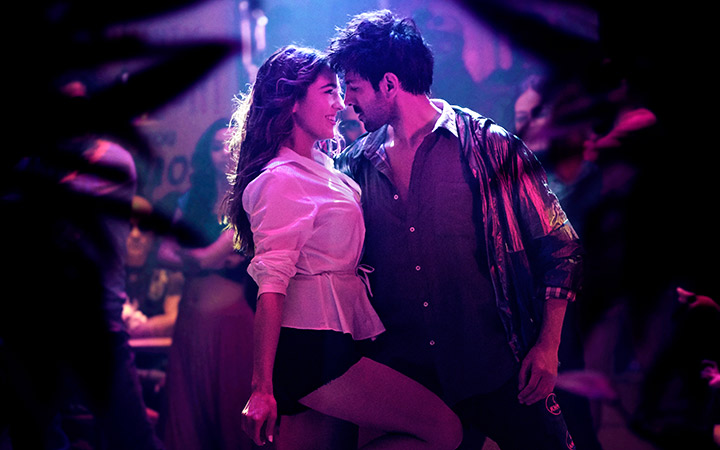 It is old world charm revisited with ‘Shayad’ which has Arijit Singh taking center-stage. Just the kind of song that is made for hearts deeply in love, this one is for die hard romantics. Be it the lyrics, music or the manner in which Arijit Singh goes about rendering this one, ‘Shayad’ is a winner all the way. No wonder, its ‘reprise version’ comes later in the soundtrack as well with newcomer Madhubanti  Bagchi giving Arijit coming. Had this song been promoted more aggressively, it could well have turned out to be a major chartbuster already.

Next to arrive is ‘Mehrama’ and the song just picks up from where ‘Shayad’ left, hence turning out to be yet another beautiful melody that makes an entry right into your heart. Darshan Raval and Antara Mitra pair up for ‘Mehrama’ which later also arrives in an ‘extended version’ and makes you long for the one you love. These two songs, coupled with an additional version each, set the ‘sur’ of Love Aaj Kal and one expects the romantic mood to continue right through.

This is the reason why ‘Raftaar’ rendered rap track ‘Parmeshwara’ turns out to be nothing but a rude shock. A truly annoying piece which just doesn’t manage to register itself and is a misfit both in the soundtrack as well as the film’s narrative, it tries to be all cool and smart but fails big time. This one just didn’t have a place in the music of Love Aaj Kal.

Arijit Singh is back in the fold and he croons two back to back tracks, ‘Rahogi Meri’ and ‘Haan Tum Ho’. Yet again, it’s the usual romantic mood that is created in these love songs that are just the kind that one expects in an Imtiaz Ali film. Not that these songs are chartbusters in the making as they aren’t really massy in their presentation and outlook. However if you just want to sit back, relax and think about the one whom you love the most, ‘Rahogi Meri‘ and ‘Haan Tum Ho’ (which has Shipra Rao entering the fray as well) truly end up fitting the bill.

Mohit Chauhan had rendered ‘Yeh Dooriyaan’ in the first Love Aaj Kal and there is a new version of the song that arrives in the latest Love Aaj Kal with the same title. The singer brings all his experience into play with this heartfelt number that is just the kind which is to be heard with quietness and serenity all around. Carrying a good dose of pain with it, this one has the signature theme that went in the background of ‘Yeh Dooriyaan’, hence bringing on the nostalgia.

The tonality of the soundtrack changes though with ‘Dhak Dhak’ and though this one is at least somewhat better than ‘Parmeshwara’, yet again it is a misfit into the soundtrack. Trying to infuse ‘pahadi’ style into the contemporary sound, this Nikhita Gandhi and Akasa rendered track tries to bring in everything from Rumi to internet in one go but doesn’t really make you play it in loop all over again.

Thankfully, it is back to romantic zone with ‘Aur Tanha’ which sees KK return after a hiatus. With a guitar in the background, this is yet another song which has a heart in love longing for the one closest to it. A soft rock number that goes well with the film’s narrative, this one could well make it as a bonfire affair amongst youth.

The soundtrack concludes with a bang though with Arijit Singh and Shashwat Singh coming together for ‘Haan Main Galat’. A new age version of ‘Twist’ that had made huge waves in Love Aaj Kal [2009] more than a decade back, this one actually turns out to be a very good version of the original. Number of times one has complains around recreated versions not really matching up to the original but this one actually succeeds in taking it to the next level. Chartbuster.

The music of Love Aaj Kal has consistency written all over it, barring a couple of songs which are misfits. There may not be many chartbusters out there but if you are the one who is either truly in love with someone or is nursing a broken heart, Love Aaj Kal does well in rekindling those emotions well enough.