Well, this could be a record of sorts when an entire soundtrack of a film has been made out of recreated versions. However, this is what happens in case of Luka Chuppi which has five songs in there and each of these has been a hit in its original versions during the last few years gone by. Let’s check these out. 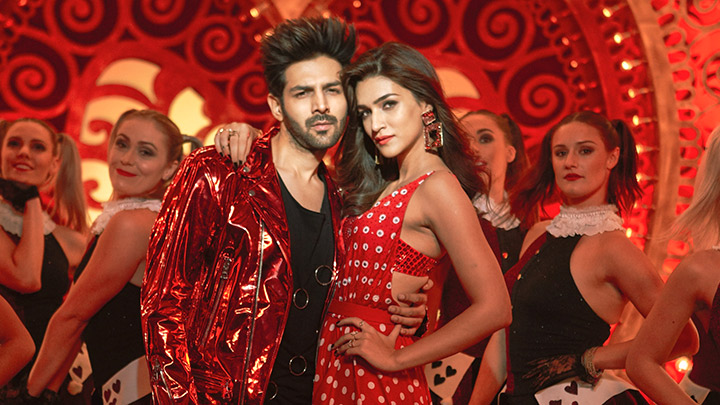 The only song in the album which has been recreated from a Bollywood flick, ‘Poster Lagwa Do’ is based on ‘Ye Khabar Chapwado Akhbar Mein’ from Akshay Kumar and Urmila Matondkar starrer Aflatoon. This time around the singers at the helm of affairs are Mika Singh and Sunanda Sharma, and both come up with a very energetic outing. White Noise Studios is the force behind the new composition and lyrics, though this version could have done without the brief rap portion. Also the crescendo that picks around ‘Ek Ladka Ek Ladki’ is a bit odd and avoidable.

Tanishk Bagchi, the man responsible for quite a few recreated versions during the last few weeks, picks Tony Kakkar’s ‘Coca Cola’ and gives it a new flavour, pun intended. This one is an instant party hit and you want to hit the dance floors while it is on. Tony Kakkar pairs up with Neha Kakkar for this song and also writes lyrics along with Mellow D with Young Desi stepping in for the rap portion, which actually works for this number. In the same mould as the kind of dance numbers that were last seen in Kartik Aaryan’s Sonu

Ke Titu Ki Sweety, this is a winner.

Things turn sober after a couple of dance numbers with Tanishk Bagchi recreating Goldboy’s ‘Photo’. A love song about remembering the one whom you love most, this one has beautiful and simple lyrics by Nirmaan that add on to the romantic appeal. Moreover, the manner in which Karan Sehmbi sings this one, it turns out to be instantly likeable too. The only regret? This one is way too short in duration as one would have wanted to hear more of it.

Celebration number ‘Tu Laung Main Elaachi’ comes in next and Tanishk Bagchi scores well yet again while recreating Gurmeet Singh’s ‘Laung Laachi’ that was originally sung by Mannat Noor. Kunaal Vermaa is the lyricist for the new version that has Tulsi Kumar as the singer. She is just the right choice for this sweet and pleasant sounding number that is set to be a rage all over again up North, given its traditional flavour that is out and out ‘desi’.

When composer Bob and lyricist Raja came up with ‘Khaab’ a few years back, even they wouldn’t have imagined that it would emerge as a major chartbuster with a really good shelf life. This is what has happened now; what with the song finding a new version in the form of ‘Duniyaa’ that indeed has a timeless appeal to it. Akhil, who had sung the original version, returns along with Dhvani Bhanushali and Bhrigu Parashar for this really beautiful love song that has new lyrics by Kunaal Vermaa and music put together by Abhijit Vaghani. A winner all over again!

The music of Luka Chuppi is a major winner with a wide variety to it that should appeal across segments. Agreed that there is no new original number in there but then the packaging of earlier chartbusters ensures that you are hooked right though the proceedings.