It is in fact surprising to find a soundtrack for Sonchiriya. Yes, director Abhishek Chaubey has incorporated music in his earlier films like Ishqiya, Dedh Ishqiya and Udta Punjab. Still, with the Chambal setting of Sonchiriya, you don’t quite expect music in there. However, Abhishek has done that by bringing on board composer Vishal Bhardwaj and lyricist Varun Grover. 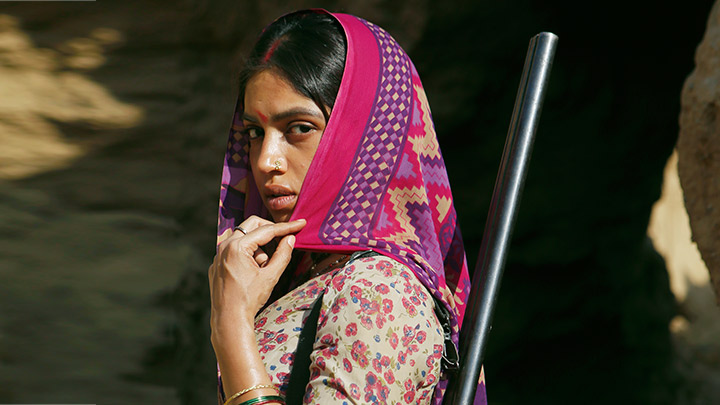 It is a Western country music beginning for Sonchiriya as Mame Khan brings on an ‘alaap’ for ‘Baaghi Re’ even as a guitar plays in the background. This one has a haunting feel to it which goes well with the theme of the film. Moreover, there is this distinct Vishal Bhardwaj element that comes into play for ‘Baaghi Re’ which sets it apart from the other soundtracks that you hear in Bollywood. Not that this one, or its ‘remix version’ that follows, would be a chartbuster but in the context of the film it plays its part well.

Rekha Bhardwaj, who definitely comes up with a song or two whenever Vishal Bhardwaj is the composer, goes solo for the title song ‘Sonchiraiya’ which is later heard in the ‘reprise version’ as well. This one is a slow moving soft number and has a vintage 70s feel to it which is in line with the kind of songs that were created by Gulzar back then. This time around though it is Varun Grover as the lyricist. While yet again there isn’t any commercial value that the song comes with, it should play well as a part of the film.

Arijit Singh comes on board for ‘Ruan Ruan’ and pretty much sings this one in a style that is actually synonymous with that of Vishal Bhardwaj himself. The sound of the whistle that accompanies the song is again in line with the Western country music and you like the intoxicating feel that comes with the core of ‘Ruan Ruan’. Had this song been promoted smartly and aggressively, it could well have covered some kind of distance. That said, despite Arijit on board, this one too is basically quite niche and for a select audience.

Next to arrive is the traditional number ‘Naina Na Maar’ which has its lyrics recreated by Ashok Mizaj Badr. First upbeat number of the soundtrack, this one has Sukhwinder Singh at the helm of affairs and his free flow mode of singing does aid in bringing good vibrancy into the proceedings. He is supported by Rekha Bhardwaj and while there is some kind of energy that comes in when the song is being played, one waits to see how it is picturised for the big screen.

Last to arrive is an out and out situational number ‘Saanp Khavega’ which is basically about the ‘survival of the fittest’. A kind of number which is basically put together for the purpose of aiding the storytelling instead of playing a part where the commercial aspect of the soundtrack is enhanced, this Sukhwinder Singh sung number just about passes muster.